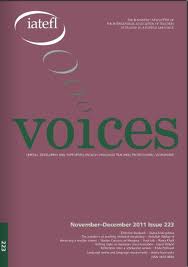 A few blogs ago, we discussed Chaz Pugliese's article in which he doubted the benefits of CLIL. We couldn't resist responding, and our article has just been published in the newsletter of IATEFL (International Association of Teachers of English as a Foreign Language), Voices, 225. Here is a shortened version of our response; if you would like to read the complete article, contact us. We don't doubt CLIL!

Many of Chaz’s doubts are based on issues to do with the implementation of CLIL, and not with the fundamental concept of CLIL. In the , research and experience has shown that CLIL works: CLIL students reach high proficiency levels of English, and their proficiency in Dutch as well as the content knowledge of their subjects taught in English are not negatively affected.
In our context, CLIL is not only about language learning, but also about developing cognition as well as intercultural and international understanding. As members of a CLIL inspection team visiting bilingual schools, we encounter students with high level thinking skills who consider themselves to be global citizens.
Chaz says that English will in the long run threaten some weaker European languages. This is a misconception, since CLIL is concerned with supporting bilingualism: that is the development of two languages, as well as content knowledge.
The European Platform and the Network of Dutch bilingual schools have formulated a quality standard and inspection system for bilingual education. This states that results for Dutch should not be lower than the national average, a standard that has been maintained: so it is possible to manage a bilingual education system whilst still promoting the national language of education. Furthermore, there is actually no evidence to show that children learning content through a foreign language will develop less or deficient content knowledge.
A third doubt mentioned by Chaz is that “The kids do not master their adopted language.” Our experience is that CLIL students achieve a much higher level in their adopted language (English) than their peers in regular education. Students from bilingual schools have a distinct advantage when entering higher education because of their excellent language proficiency.
Chaz is rightly concerned about the language level of the teachers working in CLIL. We acknowledge this concern in the , since teachers are required to improve and maintain their level of English.
As Chaz states, Ministries do fail to support teachers if they fail to provide requisite training. CLIL methodology skills are as important as language skills. Two-week crash courses in English (or biology or history!) are not enough for a teacher to become an effective CLIL teacher. We would plead for “train the CLIL trainer” courses to be put into place across .
“CLIL seems to rely on the fact that languages are acquired, rather than learned” writes Chaz. We have to disagree with this. There is not an assumption in CLIL that students will effectively acquire English if they are exclusively exposed to the target language without any deliberate focus on learning. CLIL is concerned with the ways subject and language teachers have to support and give specific attention to the language needs of their learners.
Chaz asks two more questions: What is meant by ‘learning’ in CLIL terms? Can students function comfortably in social as well as academic situations? Here, he is misinterpreting the aims of CLIL, which are to develop BICS (basic interpersonal communication skills) and, at a later stage, CALP (cognitive academic language proficiency). Since there is an emphasis in CLIL on students producing output (speaking, writing), we find that they are able to develop language skills for a range of situations, from the social to the academic.
CLIL should definitely not be seen as a replacement for English classes. However, we do believe that the role of the English teacher in a CLIL stream is to develop learners’ English skills (for example, general academic language across all subjects) as well as collaborating with his or her subject colleagues in supporting language development (for example, in cross-curricular projects) in the other subjects.
Chaz finally mentions that CLIL is hailed as alternative to traditional language programmes. However, in many countries CLIL is more often hailed as an alternative to traditional secondary teaching: subject teachers are becoming language teachers, rather than English teachers teaching content. In addition, bilingual education is being developed successfully in other sections of our educational system, such as higher and vocational education institutions.
Rosie Tanner, Rick de Graaff, Gerrit Jan Koopman, Annemieke Meijer and Jason Skeet, Liz Dale
Posted by Rosie at 14:54